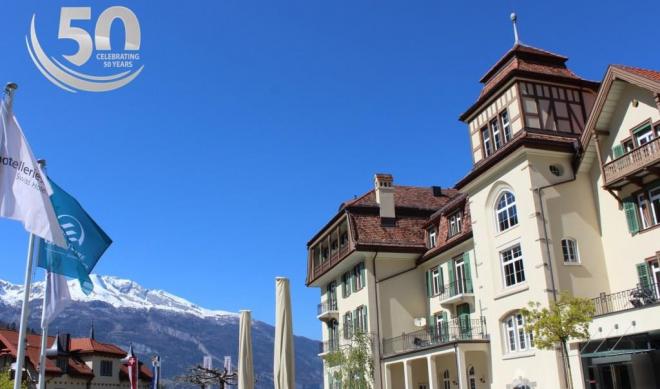 Founded on a small scale 50 years ago, the hotel department of the Hermes business school grew into an internationally renowned hospitality management school. The Swiss School of Tourism and Hospitality (SSTH) now offers attractive, substantive training programs and leads the field in its sector through its experience and expertise.

Founded by Dr. Markus Christoffel 50 years ago, what is now the Passugg hospitality management school (SSTH) developed out of the small hotel department of the Hermes business school in Chur. It did not remain a hotel department for long. The business school steadily expanded its program and soon afterward began welcoming students from the Far East. As early as 1972, the first “special courses” were given in English, separately from the purely German classes. In this way, the SSTH gradually developed from a hotel secretarial school into an internationally recognized College of Professional Training and Education.

It did not take long for the success of the hospitality management school to take off. The SSTH was popular among both Swiss and international students and its premises were soon bursting at the seams. This crisis situation led to the decision to combine theoretical and practical studies in a single location. The aim was to teach every professional skill required in the hotel and catering industry.

After a bit of searching, the spa hotel of Passugger Heilquellen AG offered the perfect opportunity. The hotel was established during the “Alpine boom” at the end of the 19th and beginning of the 20th century. It was thought that the mountains and spring water of Switzerland could cure any ill. The Ulricusquelle spring in Passugg gained a particular reputation for providing water used to treat stomach problems. This led to the former guest house being converted into the Passugg Spa Hotel. An excerpt from the 1911 guest list shows the international reputation of the spa hotel by that time, with residents hailing from Buenos Aires, Chicago and Paris. Now that the popularity of spa tourism has waned, the former spa hotel is once again home to residents from around the world – only now they are students.

Even now, the twin-track model remains at the heart of the SSTH, which aims to serve as a model for practical hospitality industry training in Switzerland. In 2013, the Ecole hôtelière de Lausanne (EHL), the world’s pre-eminent hospitality management school, invested in the SSTH. The SSTH is now part of the EHL Group, and is thus able to offer the complete range of training. It trains and educates trade professionals and management staff for the hotel and catering sector. It offers everything from foundation training to a bachelor’s degree, which opens up whole new international opportunities for graduates. The SSTH’s sophisticated programs are accredited by the Swiss federal government and are combined with practical training at the highest level that meets the requirements of 4 – 5 star hospitality establishments. Students get plenty of chance to put what they have learned into practice in the different in-house restaurants, at reception and in housekeeping, which prepares them for working in a hotel.

Over the last 50 years, the SSTH has thus built up an attractive, substantive training program and boasts not only a great deal of experience, but also tradition and recognition in the industry. Passugg’s former spa hotel provides a unique learning atmosphere in Graubünden, Switzerland’s number-one tourist destination. Since 1966, more than 5,100 students have graduated from the SSTH. Students at the SSTH join an auspicious international network of alumni that reaches way beyond graduation. This offers SSTH graduates outstanding opportunities for personal development and career prospects.